Email Us robert@heartwoodconstructionllc.com
Call Us Now For
Enquiry
608.826.4244
Menu
Uncategorized

We were exhausted at the end of last falls NARI remodeled homes tour.  To be honest, we were relieved when the last visitors left late Sunday afternoon.  “Ah, clean up, pull signs and go home to relax for what was left of our weekend“, we said as we walked onto the back deck we had recently put on the kitchen addition.  Just then out from the kitchen and onto the deck walked Ken and Susan who had been talking with Sam our lead carpenter about an addition they wanted to get started on before winter froze everything solid.   “We talked with your carpenter and left our information so you can get in touch with us”, says Susan without breaking  her stride for the street.  Its as if she knew we had already closed up shop in our minds and she said just what needed to be said and left it to us to follow up in a fresh week.

That was a good start of a relationship between the personal of Heartwood Construction and Ken and Susan.  They wanted to add a family room/laundry room addition on the back of their very cozy 1927 Cape Cod.  The proposed 350 square foot addition would add that extra room that makes the difference between a cramped house and one where you can take a deep breath- inhale and exhale- without worrying about breaking a window.

There were some design challenges on the outset that needed to be overcome.  The first one was getting away from a shed roof addition that would have been the most cost effective and the most, the very most, ugly.  Another was adding an addition on the back of their house and at the same time not obstructing the natural light that came through the kitchen windows which were also on the back of the house.  Third was building a gable end addition that didn’t require remodeling the upstairs bedroom windows.

The designer, Mark Collin, came up with a clever idea that carried the steep pitched roof and zero overhang gable ends on the existing house onto the addition.  Then he offset the addition so it left the kitchen windows clear to allow sunlight in.  He designed the addition to clear the upstairs window by creating a roof with a 6/12 pitch for the first 6 feet and a 13/12 pitch for the rest of the roof up to the ridge.  The addition now fits nicely on the back of the house the top of its roof coming in just under the existing 2nd floor eave.

We had several building challenges along the way.  The biggest one was during excavation we hit the water table at footing depth and 2 feet of organic silt below that.  Ah Oh!  Everything stopped, we had soil samples run and brought in a structural engineer to re-design the footings and foundation walls to support the addition on existing soil.  We ended up having to undercut the silt to get down to sandy soil and replace it with 2 feet deep compacted ¾” clear stone.  This gave us a base to form and pour our 2 ½’ wide spread footings reinforced with rebar.  The foundation was also reinforced with two rows of continuous rebar top and bottom.  Then we had a foundation that we could confidently build on.

The hardest part of this discovery was going back to Ken and Susan and working out budget details with them.  What was slated to come in at around $80,000 now escalated to just over $100,000.  From discussions we had we knew they were already at the top of their budget and we thought the job would stop right there, we would fill in what we excavated and walk away extremely dissatisfied.  Ken and Susan showed tremendous trust and patience without which there is no way in the world this job would have been a success.  After a couple of meetings and new pricing Ken and Susan decided to commit to the newly designed foundation and budget and saddle up for the journey.

We knew from the start that bulk ground water control was key to this projects success and had a 24” deep by 30” wide sump crock installed with a battery backup sump pump.  We had perimeter drain tile on the interior and exterior of the footing and a grid of drain tile under the basement slab all draining into the sump crock.  Conventional wisdom says, and in the past, we have always put a foot of clear stone around the drain tile and figured that was good enough.  After arguing with the structural engineer and the soil scientist on this point they sited several facts that changed our mind on this building practice.  They insisted that a foot of torpedo sand around a sleeved drain tile is better because the torpedo sand acts a natural filter for the silt and will not allow the drain tiles’ silt sock to clog.  Where clear stone lets both water and silt through and tends to clog up the sock  preventing water from getting into the drain tile.  One thing that we learned is don’t let a crew that is used to using clear stone install the drain tile you are going to put torpedo sand around.  They leave big cracks in the drain tile connections and tears in the drain tile sock that will let lots of sand into the drain tile, into the sump crock and into the sump pump.  Fortunately, we discovered this before the slab was poured and before very much of the backfilling was done.  On the exterior drain tile connections we put 4” T connections and 4” to 3” reducers not just a 3” tile shoved into a 4” tile.  For extra insurance we put heavy duty plastic wire straps to hold the sock over all connections.  We ended up with a system that works very well and after almost two months of use has only a trace of sand in the bottom of the sump crock.

The rest of the job went pretty smoothly.  This was our first certified Green Built Home and it has a number of green features.  We caulked the sill plate to the foundation using a good quality caulk.  We framed the wall studs 2’ on center and didn’t use a top plate reducing the amount of lumber used on the job.  Most of the framing lumber and OSB we used came from Forest Stewardship Council certified mills.  We installed 1” Dow blue board on the exterior over the OSB and the insulation company did a really nice job of using advanced air sealing techniques.  After sealing up all the cracks and holes they filled the walls with a Blown in Blank System (BIBS) of fiberglass to achieve an R-23 in the walls and an R-50 blown in fiberglass in the ceiling.  They used a closed cell spray foam in the box sills.  We re-used three interior doors and one stain glass window from the existing house in the addition.  The deck has Trex decking with a Trex guard and hand rail, all made from reclaimed wood and plastic bags.  The maple floor was salvaged from a gym in Ohio, installed, sanded and finished to match the existing maple floors perfectly.  Probably everyone else knows to double the installation budget when installing reclaimed hardwood floors so you cover the time it takes to remove years of hardened gunk from the tongue and groove edges.

This addition was the most challenging of any project we have worked on.  At the same time, it has been the most rewarding.  We learned more on this job than any previous job and with the expert help from some very competent sub-contractors, we ended up with an awesome finished product.  Ken and Susan are very happy with the functionality and beauty of their new living space.

As Ken and Susan and whole crew stand in the recently poured driveway gazing at the completed addition, rolling over in conversation all we had to do to get this one done an echo reverberates across Lake Mendota like a full-throated yell from the edge of the Grand Canyon, each voice joins in the harmonious symphony of our final opus, “God, I’m glad this is over.” 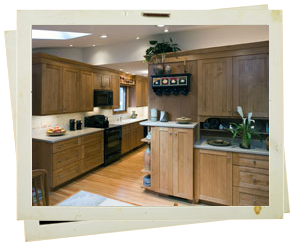 © Since 2011 | Heartwood Construction, LLC. | All rights reserved.
Hosted and Developed by anARTIST unleashed